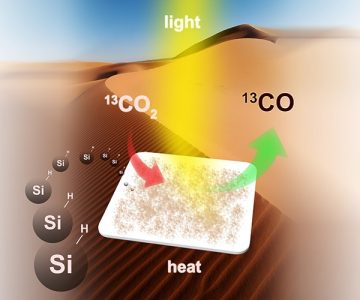 Every year, humans advance climate change and global warming — and quite likely our own eventual extinction — by injecting about 30 billion tonnes of carbon dioxide (CO₂) into the atmosphere.

The idea of converting CO₂ emissions to energy isn’t new: there’s been a global race to discover a material that can efficiently convert sunlight, carbon dioxide and water or hydrogen to fuel for decades. However, the chemical stability of CO₂ has made it difficult to find a practical solution.

“A chemistry solution to climate change requires a material that is a highly active and selective catalyst to enable the conversion of CO₂ to fuel. It also needs to be made of elements that are low cost, non-toxic and readily available,” said Professor Geoffrey Ozin, the Canada Research Chair in Materials Chemistry and lead of U of T’s Solar Fuels Research Cluster.

The Solar Fuels Research Cluster is a university-wide collaboration, including Materials Science & Engineering (MSE) researchers Abdinoor Jelle, Jia Jia, Kulbir Kaur Ghuman, and Professor Chandra Veer Singh in collaboration with Charles A. Mims, Paul G. O’Brien and Thomas E. Wood (all ChemE) and Amr S. Helmy (ECE). In an article in Nature Communications, the team reports silicon nanocrystals that meet all the criteria. The hydride-terminated silicon nanocrystals — nanostructured hydrides for short — have an average diameter of 3.5 nanometres and feature a surface area and optical absorption strength sufficient to efficiently harvest the near-infrared, visible and ultraviolet wavelengths of light from the sun together with a powerful chemical-reducing agent on the surface that efficiently and selectively converts gaseous carbon dioxide to gaseous carbon monoxide.

“Making use of the reducing power of nanostructured hydrides is a conceptually distinct and commercially interesting strategy for making fuels directly from sunlight,” said Ozin.

Abdinoor Jelle, PhD candidate in the MSE Department, credits the combined efforts of the multidisciplinary team to its success. “I feel extremely lucky to be part of a research team working towards finding an answer to some of the big problems in the world,” he said. “It is rare to see a multi-disciplinary team dedicated towards the same research goal: converting CO2 to value-added products and feed-stocks to meet the energy demands of the 21st century.”

The U of T Solar Fuels Research Cluster is working to find ways and means to increase the activity, enhance the scale, and boost the rate of production. Their goal is a laboratory demonstration unit and, if successful, a pilot solar refinery.

Jelle also appreciates the range of research topics he is exposed to within the MSE Department. “Our weekly seminars go a long way to bring different research groups together and find out what is happening in their research.”