The Winegard Visiting Lectureship in New Materials Engineering was an annual event made possible through the support of the Honourable Dr. William C. Winegard (MMS 4T9, MASc 5T0, PhD 5T2).

The MSE’s Winegard Visiting Lectureship in New Materials Engineering ran from 2010 to 2016 and attracted world-renowned academic and industry professionals who gave a two-to-three day seminar series in the Department of Materials Science & Engineering at the University of Toronto.

In 2018, Dr. William C. Winegard‘s gift was transformed into the William C. Winegard Award in Advanced Materials. This award was created to recognize MSE MASc and PhD students with exceptional academic performance, who are commitment to metallurgical and/or materials innovation and contributions to the advancement of fundamental knowledge. 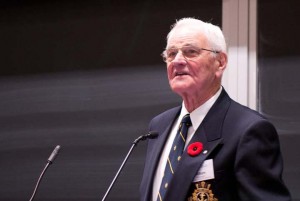 Dr. William C. Winegard (1924 – 2019) is a well-known name in the Canadian history as an educator, engineer, scientist, and former Member of Parliament. Winegard was born in Hamilton, Ont., and served in the Second World War as an officer in the Royal Canadian Navy. Receiving his PhD from the Department of Metallurgy & Materials Science here at U of T in 1952, he became a faculty member of the Department until 1967. He then moved on to become the President and Vice-Chancellor of the University of Guelph from 1967 to 1975. In 1980, he was appointed as Fellow of the American Society for Metals (FASM).

From 1984 to 1993, Dr. Winegard served in the political arena. In 1984 he successfully ran as a Member of Parliament for the riding of Guelph-Wellington, and was appointed Minister of State (Science and Technology) from 1989 to 1990, then Minister of Science from 1990 to 1993.

In 1998, Winegard was named an Officer of the Order of Canada.