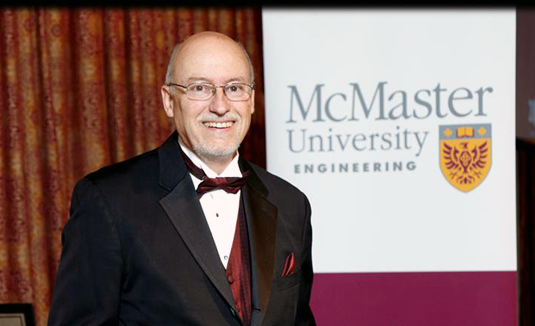 As a teacher, Dr. Wilkinson has been involved in the development of a new introductory materials course involving a highly interactive learning environment for over 900 first-year students. As a researcher, Dr. Wilkinson has authored over 200 scientific publications, specializing in the mechanical behaviour of both metals and ceramics.

In 2008, Dr. Wilkinson was awarded the title of Distinguished University Professor at McMaster University, an award available to only eight active faculty members in the university at a time. In 2009, he was elected as a Fellow of the Royal Society of Canada (FRSC) and in 2010 as a Fellow of the Canadian Academy of Engineering (FCAE).

In 2013, Dr. Wilkinson returned to U of T to participate as a leadership panelist during the U of T department of materials science and engineering’s centennial celebrations – 100 Years of Materials Innovation (1913-2013). In the same year, he was also inducted into the U of T Engineering Alumni Association’s Hall of Distinction, an assembly of peer-selected graduates who embody the pinnacle of achievement in their professions.