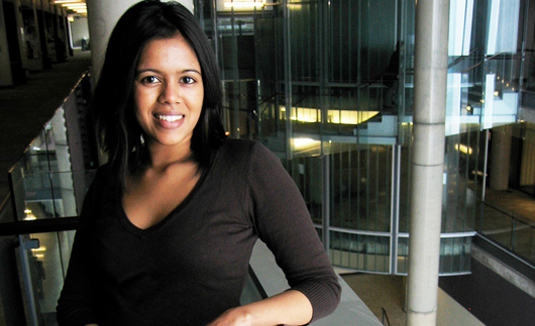 A dedicated advocate of enhancing the engineering student experience through her own leadership, Varuna’s involvement with Skule™ has included reporting for The Cannon newspaper, outreach officer for Engineers Without Borders, student representative on the Engineering Faculty Council, and chair of the MSE Undergraduate Student Club in her fourth year.

In 2008, Ms Prakash graduated second in her class with a Bachelor of Applied Science (BASc) in Materials Engineering and was a recipient of the distinguished Gordon Cressy Student Leadership Award. Named after Gordon Cressy, former vice-president of development and university relations for the University of Toronto, the award is the highest-level honour bestowed by the University for volunteerism and community service to graduating students.

In 2010, she completed her second degree — a Master of Health Science (MHSc) in Clinical Engineering from the Institute of Biomaterials & Biomedical Engineering (IBBME). Ms Prakash then held internships at various national and international organizations, including the Massachusetts General Hospital in Boston and the World Health Organization in Geneva where her work involved clinical technology implementation and global eHealth intelligence.

Then, Varuna returned to Toronto and joined the Healthcare Human Factors group in the University Health Network (UHN) as a Human Factors Specialist. There, her expertise and passion in healthcare and technology is applied in the areas of patient safety, medical device usability, and effective design.

In the fall of 2013, Varuna decided to further pursue her professional interest and passion for healthcare, and was admitted as a medical student here at U of T. She returned to share her passion for both materials engineering and the field of healthcare by participating in the centennial celebrations as a Graduate of the Last Decade (GOLD) panelist, sharing her views and passion for engineering and medicine with students and alumni alike.