MSE alumni make the leap from lab to market 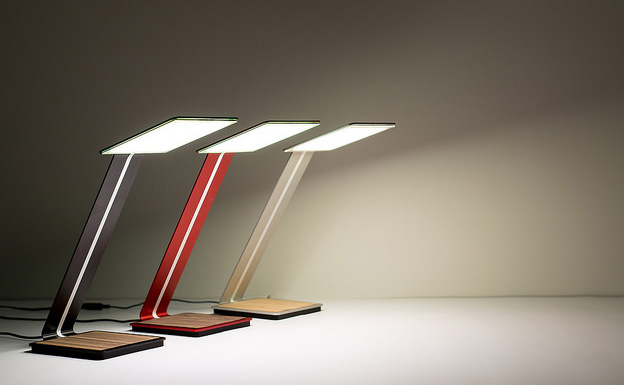 Google “OLED,” and you’ll find scores of articles confidently predicting that this is the year of the organic light-emitting diode. Some of those articles are ten years old. Still, there are reasons to believe the OLED age is finally dawning. In fact, Dr. Michael Helander (EngSci 0T7, MSE PhD 1T2) is betting on it. Three years ago, he was a PhD student with an important discovery just published in Science, a rising star who could have had his pick of academic postings. Instead, he gave up a life in research to start a technology company he named OTI Lumionics. The failure rate of technology startups, by some estimates, is 90 percent.

Who would trade the life they’d dreamed of for a chance to play Russian Roulette with five chambers loaded? Someone who’s counting on a lot more than just luck.

“Lighting is still in its dark ages. Even the latest technology—the LED—comes packaged to resemble Edison’s 1880 bulb.”

Why the fuss about OLEDs? And what on earth is an OLED? The best answer to both questions is OTI’s first and only consumer product, the aerelight. It’s an aluminum table lamp—sleek, angled, and a little retro (reminiscent of an older Canadian beauty, 1968’s Contempra phone). The light comes from a 10-cm square wafer no thicker than two sheets of paper—an OLED.

Not only is the lamp beautiful, so is its light. OLEDs are cool to the touch but warm to the eye, dimmable, flexible, and efficient. They don’t blaze from a single spot like an LED; they diffuse evenly from every point on their surfaces, which can be arbitrarily large. After seeing the aerelight, other light sources—whether incandescent, fluorescent, or LED—immediately seem huge, hot, and obsolete.

Like a conventional light-emitting diode, an organic LED produces light when a voltage is placed across it. The difference is the material between the electrodes. Instead of a crystalline semiconductor, OLEDs use organic compounds— plastics, in essence—similar to the pigments used in colour Xeroxes.

“LEDs are grown from perfect single crystals,” Helander says. “The probability of a defect increases exponentially with size, so it’s limited to a point source. Organic molecules don’t have any long-range order, so they don’t need a perfect single-crystal structure to work. That’s what allows you to distribute it across a large surface.”

Lighting isn’t the only place the OLED shines. It’s already made an appearance in smartphone displays and television screens, where its other advantages—richer colours, deeper blacks, and near-instantaneous response times—make it the heir apparent to the liquid crystal display. But OTI is staying away from displays. Multinationals like Samsung and LG have already spent billions to enter and fight over that market.

Lighting, on the other hand, is still in its dark ages. Even the latest technology, the LED, comes packaged to resemble Thomas Edison’s 1880 bulb. That paradigm is about to shift. Soon, a light won’t be a product, but a feature of a surface—any surface. Windows, walls and wallpaper, furniture, cars, and clothes: light will come from everywhere.

“If they’re willing to pay this much now, there must be much more value than they’re letting on—let’s try making a go of it ourselves.”

If OTI succeeds, Toronto-born Michael Helander will be the reason. He’s a force of nature, intense, ambitious, and at 29, astonishingly accomplished.

He reached that decision after stumbling on a major discovery. Helander and OTI cofounder Dr. Zhibin Wang (MSE MASc 0T8, PhD 1T2) were working with indium tin oxide (ITO)—the industry-standard, transparent yet-conductive coating used in every kind of flat-panel display—when they noticed something unexpected. Some of their samples were working far more efficiently—carrying much more current—than they should. They assumed their equipment was improperly calibrated, but soon ruled that out. The effect was real. Their ITO had been contaminated.

It took months to find the culprit: chlorine from open bottles of cleaning fluid. “Basically, breaking the safety rules,” Helander quips. “The next step: how do we make use of it?”

Helander, Wang and Professor Lu published their answer in Science in May of 2011: chlorinated ITO. A one-atom thick layer of chlorine dramatically increased the brightness of OLEDs while reducing their energy consumption by up to 50 percent. It also drastically lowered their cost by reducing the number of organic layers needed to make a diode from as many as eight to just two or three.

That news was greeted with considerable interest. “Big companies started approaching us,” says Helander. “They wanted to license or buy the technology. We thought, if they’re willing to pay this much now, there must be much more value than they’re letting on. Let’s try making a go of it ourselves.”

So they created OTI Lumionics. The initials don’t stand for anything. It’s just ITO backwards, a declaration that their approach would be 180 degrees from usual. “Lumionics” is a fabricated word that sounds like light, a choice Helander somewhat regrets because nobody seems able to spell it.

At first, Helander thought OTI would be nothing more than a stepping-stone to an academic career. “When we started the company, we viewed it as another checkbox on the academic CV. Successfully commercialized tech: check.”

But as the months rolled by, a desire to finish what they’d started in the lab took root. Helander and Wang decided their future lay with OTI. Giving up academia for entrepreneurship wasn’t hard, Helander says. By the time he’d earned his PhD, his name was on over a hundred publications, more than most researchers produce in an entire career. “When you get up to that number of publications it’s almost like a paper mill; it’s just a formula you’re repeating,” he says. “It felt like we had learned the game and it wasn’t challenging anymore. We wanted new challenges.” Helander takes me into the back corner of OTI’s new offices in the University of Toronto’s venerable Banting Building on College St. The room is dominated by a seven foot-tall vacuum-deposition chamber that looks like a giant robotic squid.

“This is our rapid prototyping module for organic LEDs,” he says. “It allows us to make large, flexible panels in about an hour.” He bends a six-inch square sheet of shiny blue-green plastic—a freshly-made OLED—into a half-cylinder. I want to ask for details, but Helander is already talking about his plans for the larger, still empty, room adjacent. “The pilot scale-up next door will be the same process, except it’ll be ten modules next to each other, so the production time goes down
from an hour to minutes.”

Before I can quiz him on that, he’s shifted gears again. “The step after that, starting next year, is building a full production plant, hopefully somewhere in southern Ontario.” Helander speaks very fast, at the edge of comprehensibility, skipping syllables and sometimes entire words in a losing fight to keep up with his own thoughts. “We’ll be pulling together a whole syndicate of partners that are throwing in a whole bunch of support. We’re hoping to get money from the province as well and raise another round of financing. It’s a massive project.”

Sounds ambitious, I manage to interject. “Very ambitious,” he agrees. “People tell us we have lack of focus. But to understand our customers, we have to have our hands in everything. At the same time, we’re a small company. For what we’re doing we should have ten times the personnel and twenty times the capital. Trying to do the impossible—that’s how you succeed.”

So OTI’s nine employees are making OLED panels and assembling lamps on College St. At the same time, multibillion-dollar giants like Philips, LG, and Konica Minolta are preparing to turn out OLED panels by the million. In a few months, OLED table lamps may be going for a fraction of the price—$239 (US)—of an aerelight.

Remarkably, Helander is unfazed by that prospect. “That would make us so happy,” he says. “It would prove that we’re on the right track and the market is there.”

Helander’s plan is not to sell lamps but to service niches—lots and lots of niches—that are too small for the giants. “There are a lot of partners we work with who only want 10, 50, 100, units. A massive production line can’t do that effectively. Our vision is to enable hundreds of companies, delivering on-demand whatever people need, for applications in lighting, furniture, automotive, wearables, whatever you want.”

Like any entrepreneur, Michael Helander sounds more confident than he has any right to be. For the foreseeable future, OTI will live amongst threats: an untested market, ever-mutating technology, giants ready to grind him to paste, uncertain financial backing. To defend himself, Helander has little more than a small pool of talents, patents, and ambitions.

Of course, in his case, that might just be enough.