U of T Engineering unveils $20M facility that could end crash fatalities, blood clots and our reliance on fossil fuels 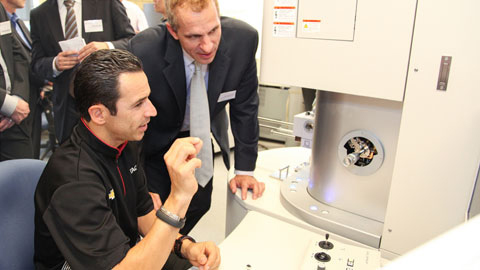 Photo: Not your average ribbon cutting – Indy champ Hélio Castroneves (left) and Professor Doug Perovic carve the name of U of T’s newest lab on a ribbon at nano-scale

When three-time Indy 500 winner Hélio Castroneves speeds around the track at this month’s Indy races, he’ll be driving a race car propelled by decades of materials research that makes him faster, safer and more efficient.

But with the opening of a new $20-million materials lab at the University of Toronto, the technology in Castroneves’ car could soon feel as old-fashioned as your grandma’s station wagon.

On July 17, Castroneves joined U of T Engineering to unveil the Ontario Centre for the Characterization of Advanced Materials (OCCAM) – a high-tech facility that enables researchers to explore and develop novel materials that could be used in electronics, renewable fuels, construction, disease treatment and even futuristic race car design.

Nano-ribbon “cutting” done with one of OCCAM’s high-power electron microscopes. The width of each letter is almost 1,000 times smaller than a human hair.

“This is expensive equipment to purchase and operate, but the new centre makes it available to everyone, from industry to academia,” said Professor Charles Mims (ChemE), a co-principal investigator for OCCAM alongside Professor Doug Perovic (MSE). The facility is a joint initiative between the Department of Materials Science & Engineering (MSE) and the Department of Chemical Engineering & Applied Chemistry (ChemE).

To celebrate OCCAM’s grand opening, Castroneves used one of the lab’s high-power electron microscopes to “cut” the centre’s name into a ribbon at nano-scale. The width of each letter was nearly 1,000 times smaller than a human hair.

The MSE logo will also be featured on the front of the racecar of Castroneves – part of the Hitachi-sponsored Penske Team – at the July 18-20 Honda Indy Toronto races.

Photo: U of T Department of Materials Science & Engineering’s (MSE) logo on Hélio Castroneves’ Hitachi-sponsored Penske Team race car on display at the 2014 Toronto Honda Indy (July 18–20). The logo was placed on the race car to celebrate the long-standing partnership between the MSE Department and Hitachi High-Technologies Canada that led to the establishment of the U of T Ontario Centre for the Characterization of Advanced Materials. (Photo: Khuong Doan)

“OCCAM is a shining example of how U of T Engineering, in partnership with industry and government, is pursuing innovative solutions to some of world’s greatest challenges in health, city life and energy,” said Dean Cristina Amon. “We are profoundly grateful to CFI, MRI and Hitachi for their contribution to the creation of this unique world-class facility.”

“We have the technology today to make vehicles so safe that car accidents no longer kill people,” shared Professor Perovic. But if we have the means, why aren’t we using them? According to Perovic, the answer is cost – cost of materials and cost of manufacturing. That’s why, through OCCAM, he has partnered with Toronto-based Integran Technologies to develop newer, inexpensive methods of boosting vehicle safety and efficiency.

Integran is the only company in the world that can coat plastic and carbon fibre with nano-metals, allowing them to make virtually any material significantly stronger with one coating. While they are continuing to find ways of reducing cost, Integran’s technology has the potential for impact beyond the auto industry, from better spacecraft to lighter and more durable bicycles.

Blood clots are essential in healing cuts, but they can be deadly for those requiring medical catheters (tubes that carry medicine or drain fluids in the body). Dangerous clots can form around the tubes in a process called thrombosis – an affiliction that leads to approximately 50,000 deaths in the United States each year.

To reduce the risk of blood clots, Professor Paul Santerre (IBBME), Jeannette Ho (ChemE/ IBBME MASc 9T7) and a group of other medical scientists and engineers have designed a method of producing catheters that include fluorinate oligomers, the same molecules that make frying pans non-stick. Already commercially available through licensing from Santerre’s spin-off company Interface Biologics, their invention has shown to reduce the rates of thrombosis by up to 75 per cent.

“OCCAM gives us access to tools and expertise that a small lab like us wouldn’t normally have,” said Roseita Esfand, director of research and development at Interface. “Collaborations such as this will help us to bring our technologies and products from bench to human.”

Professor Ben Hatton (MSE) and group of multidisciplinary researchers are using OCCAM’s advanced equipment to design nano-materials that mimic the photosynthetic processes of plants. While plant photosynthesis uses the sun’s rays to produce sugars and carbohydrates, Hatton’s lab is hoping to make materials that produce methane and other gases.

This technology could be used to power vehicles, houses and more – and to store energy we aren’t using for later consumption. In doing so, they could reduce, and even reverse, the detrimental impacts of fossil fuels. “We’re still in early development stages,” explained Hatton. “But we’re excited by the advances and resources that OCCAM will provide, and we look forward to making our technology better and more efficient.”