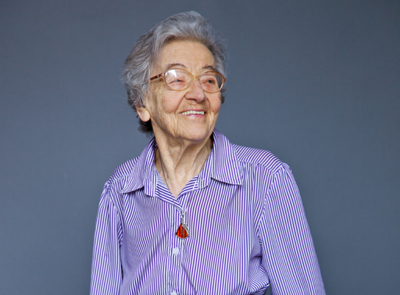 “The safest have to look after the least safe. There’s no other way of doing things.” –Ursula Franklin, University Professor Emerita

Ursula Martius Franklin died peacefully at the age of 94 surrounded by family and friends. With Ursula’s passing, Canada lost one of its most accomplished scientists and educators and one of its most renowned feminists and social activists.

Ursula Maria Martius was born in Munich on September 16, 1921, the only child of Albrecht Martius, a Lutheran archeologist, and Ilse Maria Martius (née Sperling), a Jewish art historian.

While studying mathematics and physics in Berlin she was removed from her studies towards the end of the Second World War and interned in a forced labour camp at the age of 22. She spent the rest of the war repairing buildings, forced to work outside in the cold and suffering from frostbite to her feet and legs. This damaged the lymphatic drainage system of her legs and left her in constant pain that afflicted her throughout her life.

After the war, she received her PhD degree in experimental physics at the Technical University of Berlin in 1948. Although her interests were deeply rooted in history, literature and law, she chose to study physics and math because as Ursula said: “the only things that could not be censored were mathematics and physics.”

Following her PhD, Ursula won a scholarship, immigrated to Canada, and became a postdoctoral student at the University of Toronto in 1949. Soon after her arrival, Ursula met her husband-to-be Fred Franklin, also a German immigrant and an engineer. They joined the pacifist Society of Friends (the Quakers) and were married in 1952.

Ursula worked as a senior scientist at the Ontario Research Foundation from 1952-1967 specializing in the study of metals and alloys. During these years she also conducted what is possibly her greatest research accomplishment with the widest international impact. With nuclear research and testing moving forward at great speed, Ursula’s devout pacifism as a Quaker pushed her to investigate whether radioactive isotopes produced by atmospheric weapons tests were being absorbed by humans. Like a real-life tooth fairy she collected many baby teeth from family, friends and colleagues and detected large 2 quantities of strontium-90, an isotope known to significantly increase the risk of cancer of the blood and bones. Contrary to previous thought that radioactive fallout from weapons tests remained in the upper atmosphere, Ursula’s work led to the Partial Nuclear Test Ban Treaty signed by 135 countries outlawing nuclear detonations on land, in the atmosphere and in space.

Interestingly, at that time our Faculty Council meetings were held at Hart House, which was not open to women. Dr. Franklin had to get special dispensation to attend until Hart House finally opened its doors to women in 1972. Ursula always championed women that were younger than her in the fields in science and engineering and beyond.

During her years in Engineering at U of T, Ursula employed her expertise in physics, metallurgy and materials science and her knowledge of how materials have been used throughout history to pioneer her ground-breaking work in the field of archeometry – the analysis of archeological artifacts using modern materials science techniques. Through hundreds of publications, Ursula elucidated the cultural heritage of past civilizations by explaining how tools used in certain ways shaped human organization, culture and mindsets.

Prof. Franklin often spoke about the need to safely return to the earth all that we ‘borrow’, long before subjects such as life-cycle design, green manufacturing and sustainability became commonplace in engineering curricula.

In 1984, she was the first woman to be named University Professor at the U of T, a prestigious honour granted only to faculty of the highest standing.

Following her retirement from Engineering in 1989, Ursula embarked on her second career at U of T as a senior fellow at Massey College, where she worked from her office for most of her last 25 years. As one of the world’s leading interdisciplinary scholars, Massey’s environment suited her perfectly.

She received more than 25 honorary degrees and countless awards and medals. She was inducted into the Canadian Science and Engineering Hall of Fame in 2012.

Professor Franklin committed herself to social justice and to deeply engaged citizenship. Throughout her long life, she promoted the peaceful uses of science and an understanding of the social cohesion of technology–not simply the gadgets but rather how technology affects the ways humans work with each other in daily life.

Ursula Franklin will be remembered as a global pioneer, a trailblazer in science and academics, a staunch feminist and outspoken peace activist.

We also note, with regret, that her husband Fred passed away on September 19, 2016.