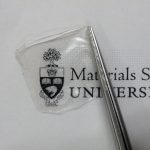 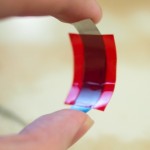 Issued by the high impact journal Materials Today, the award recognizes Gao for the outstanding presentation of his research on high-performance materials for flexible solid supercapacitors at the Materials Today Asia conference.

Held at the City University of Hong Kong in late 2014, the conference gathered hundreds of leading researchers in materials science, including more than 70 presenters in Gao’s category where he received his top prize.

The pursuit of more cost-effective and efficient energy storage solutions

“In recent years, significant efforts have been dedicated to flexible supercapacitors to supplement or replace batteries,” said Gao. “One of the main shortcomings is the liquid electrolytes, which limit the device form factors and require extra volume and weight for sealing and packaging.”

To address this problem, Professor Lian and Gao have been working on a new type of capacitor—ones that use a solid electrolyte instead.

While solid electrolytes have been investigated for the last two decades, the current convention and its derivatives are costly and only operate at high temperatures and in restricted environmental conditions. Gao’s supercapacitors are made of cost-effective, polymer-based materials and have been demonstrated to work in a range of environments and conditions. Furthermore, the chemistry of the primary material can be easily adjusted and a performance database has been mapped out in order to produce a family of these supercapacitors for a number of different applications.

“Polymer-based supercapacitors possess a number of advantages over other similar energy storage devices. There is no worry of fluid leak that could cause corrosion or fire,” said Professor Lian. “Also, the solid electrolyte does not have to be encased so it can be smaller, lighter and bendable. These novel attributes opens up entirely new uses in the everyday world, such as growing areas like printed electronics and wearable devices.”